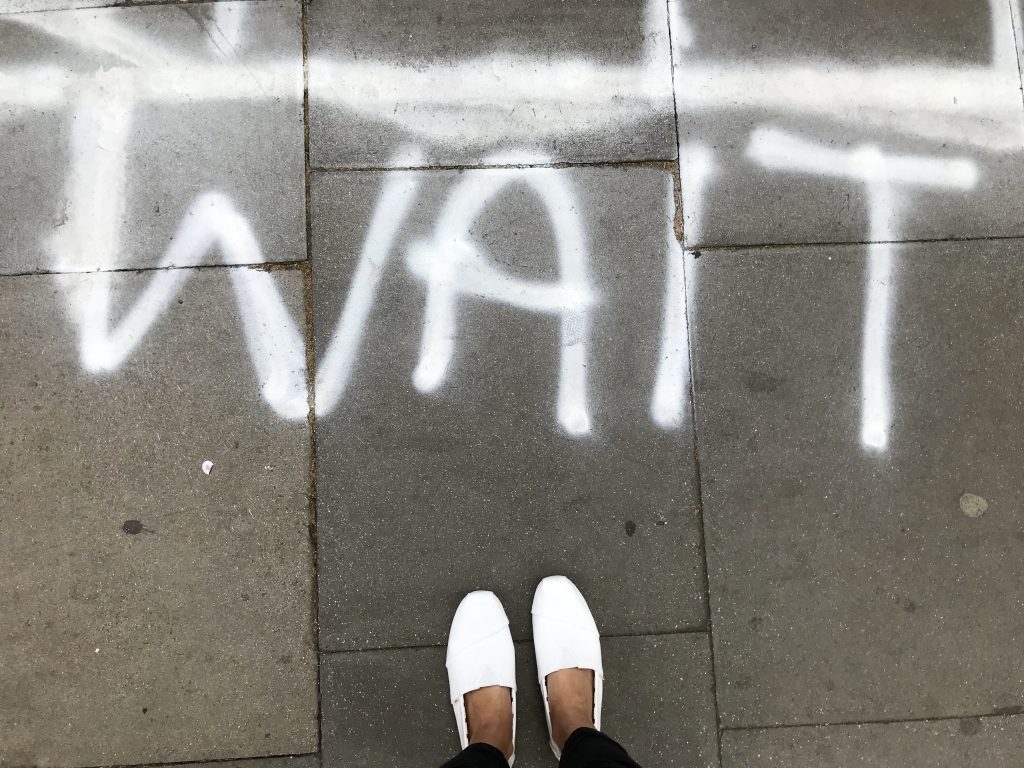 The story goes, it was reported in the local Courier newspaper, that my maternal Great Grandmother was killed  at the age of 54, by a bus in that part of Woodbury Park road where the pavement narrows into disintegration, the side where the ballet school used to be. Cars that were driving too fast up that hill from High Brooms would come screeching to a halt, unable to see the pedestrian for the thick privet hedge. It is said that she died instantly. It is said that my Grandmother, her daughter’s chestnut coloured hair, my rich inheritance, turned white on her head, overnight.

I knew a man I didn’t like very much, experience a terrible tragedy. A loss that undermined the very core of his identity, which was only spoken in hushed tones to select people, but the information still filtered to the shallows. It was already apparent on his face, no one need have announced it. Yet he continued, there could not be any external chinks in his aggressive confidence, so instead, rather than the grief cells passing through his body, flushed by the unremitting honesty of words and tears, they took up residence in his face, and his body, weighing him, as though attaching to generations of unexpressed grief. He is still heavy with it.

In October 2019 I reached what I naively believed to be a particular peak of despair. As has been the pattern of my life, it presented itself in triplicate. I was unable to feel my way down the tick list of heavy feelings immediately, they are and have often been a practical inconvenience. There was simply no time for lying on the ground and giving up. Also the magnitude of the compound loss was simply too big to consume whole, and I had no means of breaking it apart. Like all grief, it was packaged with a complex set of emotions, relief being one, so the weeding out of the pain from the exhale took just a little longer.

I would always much rather face grief, face anything by driving towards it, just getting it done so that it is no longer in the way and we can get to the good bits. As a child, I ate the vegetables of the roast dinner first, and I like vegetables, but they are not Yorkshire puddings and gravy.

It wasn’t until January 2020, where I had the decadent luxury of setting aside some weeks to write quietly in a house on Lake Kivu in Rwanda, in the safe care of a couple of puppies, that I started to feel. January 2020 seemed like a really sensible time to just get away from it all, live a limited life, place myself in a self- enforced lockdown, if you will. Oh how the history books will groan at our naivety.

I made a strange and bold choice in that time, I wanted to record the grief as it was allowed to emerge and then depart my face, so I took a number of selfies. I dislike selfies, but I presumed it would remain a personal record.

I had also presumed at the time that exhuming the grief and then emitting it to the cool evening air that rested on top of the moonlit, blue lake was about achieving a full revival, restoring me to my former self, with all of the energy that would afford. The renewal of energy, more power, more focus, and the layers of tasks, after task after task, and of course, the completion of the book I was writing.

In March, when I caught the penultimate plane out of Kigali International airport, there followed (and to be fair, was preceded by) waves of worldwide loss, of a depth and a gravity unimaginable only a few months earlier. There has been extreme, breathtakingly painful, widespread, premature death, which rocked the lives of hundreds of thousands of people.

There has been no common enemy around which an easy narrative can be built, and weaker governments, notably the UK and the US, currently reliant on those narratives to prop up their power have been stalled by the pandemic. Questions of pure economic prosperity as primary were overwhelmed, put on hold, very briefly, for the first time in my lifetime. The day to day of living and breathing and working and family, of moving one’s body, of conversations and connections have changed. And in this moment, we have no chief mourner, no one who provides permission for the necessary pause of grief, as we are now corralled into renewed economic activity that we are promised will save us. There is no permission for acceptance of this grief in our public consciousness, we can build no memorials, herald no victory.

As a result, we suppress our grief. Amongst the general population, we rightly prioritise care for those who have lost loved ones, frontline workers, bus drivers, nurses, supermarket sales assistants, all invaluable and brave, those caught in the horror of being caught in domestic abuse, having no income or are home-schooling children. These are all unimaginably challenging, overlooked, in need of additional care, attention, support, finance and escape. Yet, as a result, we often discount our own day to day, monotonous grief.

A new zero on the scale has been set, a new standard that has been quietly, intuitively agreed between us, and it factors in a deep grief that we are not designed to hold. It does not count if our courage has simply been to shield ourselves from others, to provide mutual protection, and to hold our sanity close. We are all busy attempting to put everyone’s oxygen mask on before our own, a state of empathy exhaustion.

In lockdown in London, I could no longer look at my face, I couldn’t live with the renewed grief that I might see there. So, in a bizarre and accidental act of protest I took photos of my feet, the daily documentation of looking down to attempt to monitor the passage of time.

My time of grieving in January had not been to clear the vegetables from my plate. It was the practice of grief that I learnt, to return and rest and begin again, begin again, begin again. I am once again practicing grief, allowing the exhausted monotony to leak out of the pores of my face, to look at my face and allow it the privilege of crumbling into emotion, to trust that the grief cells passing through my body would change and shape me, and that a new lightness, a new vision for what is possible may emerge.

Grief is not a conversation that the UK can hold at a national level, which is why we sit in the contorted political space of the present day. Leadership without the experience of plumbing the depths of grief, we are lost, no national narrative of loss from which to garner sustenance, no tough exploration of former and renewed identity, because we have painted ourselves as the consistent victors, never losing. Yet, there is no victory to be had here, no two fingered salute, and certainly no “we will remember them”.

A few years ago I visited the town of Rochdale in Lancashire, a town I have grown to love, and not just for its rich heritage of workers’ rights. I was chatting to people as research about identity, Brexit and immigration, and found myself at the most wonderful Christmas party, hosted for local people who were homeless. It was a perfectly imperfect community affair, the police were washing up in the kitchen, an army of volunteers and friends piled into a room singing loudly, and everyone inhaled the buffet of snacks and treats available. I sat down to chat to one particular gentlemen, and he allowed me to ask him about his life. He was one of the best workmen in town, he announced, and I really had no reason not to believe him, but his life, he told me had been turned upside down by European migrants, undercutting his fee. Discrimination, he told me. And then, as I gently excavated the details, he told me he had another job, at a factory and lost it. And then more quietly, he said it was because of the drink. Pause. The drinking got bad when his Mum died. I said I was sorry. We sat silently together.

“Tell me about despair, yours, I will tell you mine.”[i]

We must learn to grieve so that we can once again learn to live.