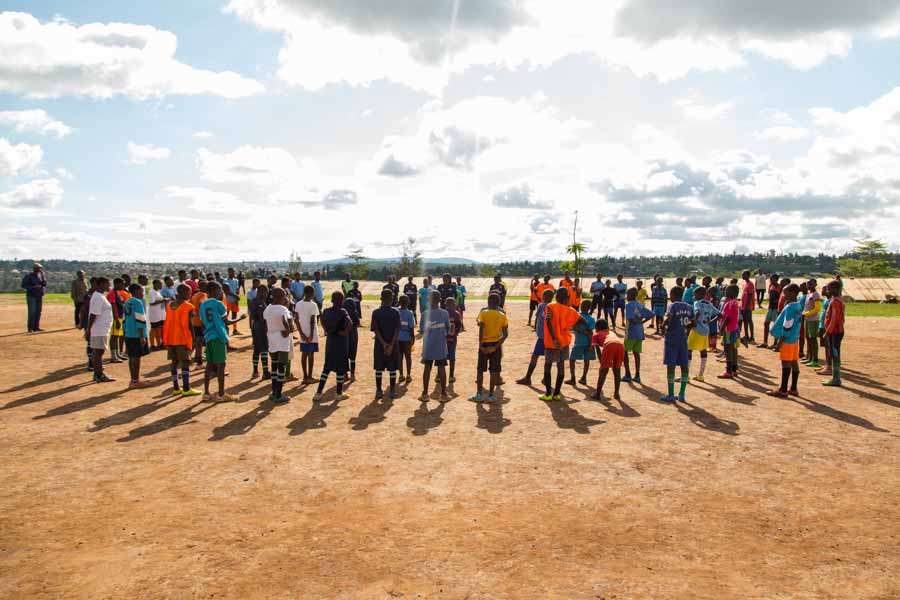 Togetherness Youth Cooperative is perched on a hillside in Munini, on the skirts of Kigali, Rwanda. The rich afternoon sun casts its glow across the valley, off the red dirt and onto the hard working, fast moving limbs of young footballers, boys and girls, who will not waste a single moment of the daylight hours between the end of school and the ever prompt arrival of the sunset.

Football is the life blood of this community, and has been since its formation. A group of orphaned kids gathered together on borrowed, unused land to spend their hours and days and weeks in the aftermath of the 1994 Genocide against the Tutsi.

This is Togetherness, a Cooperative that was formed from the ashes of the atrocity that happened on this soil, in this place. The founder of the Cooperative is Pastor Steven Turikunkiko, a man who due to his own harrowing biography was unable and unwilling to turn away children. When he could no longer fit any more orphans in his house, he helped groups to form child-headed households, the only way to ensure that someone, somewhere was looking out for every child.

Over the last 20 years the community formed. Ten years ago, a large piece of land was bought, tilled, and transformed with enterprising businesses: farming, a bakery, a pre-school, and buildings. Community gather here each day and at the core is a football pitch, dug by the youth themselves.

Years of rainfall, cascading from the top of the mountain, impeded only by a few buildings, banana trees and some vegetation, has tugged at the edge of this hand-dug pitch. Now, for the first time, proper water drainage is being introduced, the land is being prepared. Due to construction, no football has been played here for a few weeks, and the plants are seizing their brief, untrodden moment in the sun. Not for long. A large digger and a multitude of hands are clearing the space, cutting stone, flattening the earth, making it level, creating infrastructure ready for the future. It will eventually become a Junior FIFA pitch, a resource for this community, and a business proposition that will stabilise and sustain this community for another twenty, forty, sixty years.

Football, and the progress on this pitch has been made possible by the joint efforts of the Togetherness Youth Cooperative leadership, in conjunction with US non-profit, African Road. African Road purchased this piece of land and has partnered with this community for almost a decade, investing in friendship and relationship, encouraging, supporting and connecting these young people into a more expansive and sustainable future.

It was one of these strategic connections that found former Rwandan footballer, Eric Murangwa Eugene and The Ishami Foundation, a principle driver of the innovative Football for Hope, Peace and Unity training that has and continues to empower. Women and girls who are invited to the pitch, so often the protected domain of boys the world over, are now encouraged through sport to consider their value, their worth, the rightful space that the take up in the world. Young men are also involved, practicing connection and peacebuilding in formerly fractured circumstances, something that is echoed by Murangwa on pitches in the UK, his place of refuge from the 1994 Genocide against the Tutsi.  Sport, football in particular is both the driver of transformation and the mechanics of it, accessing the deep cultural roots of community football to facilitate positive change.

Members of this Cooperative and the wider community are already making their mark, with early cooperative members playing for the second division and national teams. For others it is the activity that gets them through the day, it is family, therapy, community, and focus.

By May it will be a stable pitch with tiered seating, drainage and toilets. This will secure the hillside and take the pitch half way through the evolution from a hand-dug dirt clearing, to a regulation FIFA Junior pitch.

There is still more to do. At Togetherness the story continues, with funding still required to complete the second stage of the work: lights for longevity of play, football turf, posts and nets to meet the necessary FIFA standard, and vital access to the site, with roads and parking to make this business more profitable.

You are invited to join Togetherness in building something that will sustain them mentally, emotionally, physically and financially, to be part of the ongoing story of reconciliation and hope in impossible circumstances.

Togetherness is also just the beginning, communities across Rwanda have relied on football to sustain them, they too seek better pitches, monuments to overcoming and necessary investment in a peaceful future.

The remarkable story of Eric Murangwa Eugene MBE has been turned into a BBC film, ‘How football saved my life”, with a shorter version, “The football photos that saved my life” available to view here.